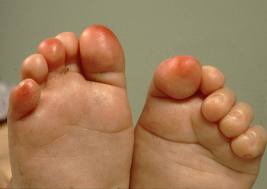 Raynaud’s syndrome is a  medical condition that causes discolouration of the fingers and toes like that shown in the picture to the right.  It is a ‘vasospastic’ disease.  This means that it occurs when the muscles around the small blood vessels in the tips of the digits go into spasm. This squeezes all of the blood out of the area. The muscle spasm is probably caused by a problem with the sympathetic nervous system, which are the nerves responsible for doing things that you don’t have to consciously control such as sweating. Episodes are normally triggered by emotional stress or by changes in temperature such as putting hands into hot water, stepping onto cold floor tiles, etc. Technically the condition is called Raynaud’s phenomenon when the cause is unknown and Raynaud’s syndrome when it is caused secondary to another condition.

Research (the Framingham Study) suggests that the condition is more common in women (around 8% of the population) than men (~5%). It is almost always bilateral (both hands or both feet) except when caused by a local restriction in blood supply.

The spasm of blood vessels deprives the skin and tissues of blood.  This initially makes the skin go pale, cold and numb.  When the oxygen that is held in the tissue is used up, the skin will change colour to blue. When the spasm finally passes, there is a flood of blood back into the digits and they will flush red before going back to normal.
Often sufferer’s nails become brittle with ridges running from base to tip. Long term cases of Raynaud syndrome can result in thinning of the skin, muscle and subcutaneous tissues. In rare cases, particularly in smokers, it can cause ulceration or even gangrene. Coffee and female hormone cycles may also have an impact.

Raynaud’s syndrome may occur secondary to a wide range of systemic conditions.  These symptoms in the digits can pre-date other symptoms of the underlying disease by long periods, even decades, making diagnosis difficult:


The diagnosis is made from a careful taking of history and may be confirmed by measuring skin temperature after precipitating an attack. Investigation of the arteries is often performed. Blood tests for kidney and thyroid function and for markers of arthritic conditions would normally be performed to see if the Raynaud’s Syndrome is part of a bigger problem. The skin of the nail fold may be examined microscopically for more clues.

Management of Raynaud’s Syndrome focuses on avoiding triggers such as cold, vibration and emotional stress. Do not smoke or be in close proximity to smokers, avoid caffeine and request that your doctor consider your condition when prescribing contraceptive medication. Treatment during an episode requires gently warming the affected parts with mildly warm water or tucking them into pockets, armpits, etc.

Treatment of Raynaud’s phenomenon may include medication to open up the peripheral arteries such as calcium channel blockers, angiotensin II receptor antagonists or alpha-1 adrenergic blockers. Other medications such as viagra, Botox and selective serotonin re-uptake inhibitors have shown promise in experimental results. In severe cases, the sympathetic nerves that incite the vasospasm can be severed, although this has significant side effects. There is less scientific evidence available for the use of ‘natural’ therapies but Ginko Biloba and fish oil have both been muted as potentially beneficial. In all cases, seek medical advice before attempting any chemical / medicinal treatment of this condition.