This information relates to prolotherapy of ligaments, tendons and joints. 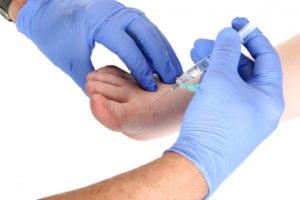 What is the idea behind Prolotherapy?

Sprains, strains or tears of ligaments and tendons often do not repair well, probably because of the more fibrous nature of these tissues and the lower amount of blood flow that they receive. Most of the joints in the body rely on having the opposing bones held tightly against each other to work properly. In a joint, loose tissues can let the bones move too far which can cause damage inside the joint or muscle spasm and overuse as the muscle fibres try to control the poor movement patterns.

A good analogy is to think of a joint like a garden gate with two hinges.  If one hinge is loose or broken, you can imagine the other being under extra pressure, becoming loose itself, twisting and perhaps allowing parts of the structure to bang together.  Ligaments are permanently damaged when stretched too far, and this point of no return is found at only about 4% longer than the normal maximum length. So an ankle sprain, for example, doesn’t have to push you too far past normal before the damage to one of these ‘hinges’ can cause an unstable joint.

For a long time, we have known that bodies heal by way of inflammation – as this is how the body activates the healing cells and sends them to the injured area.  It was thought that in a long term, chronic injury, this process went on too long, or lost its way somehow. Interest in prolotherapy has increased since it has become recognised that many conditions that we thought of as chronic inflammatory conditions were found to not actually be inflamed when examined after tissue biopsy.   It now seems that the problem is more that the healing period is too brief for these kinds of injuries as the inflammatory cells are mostly gone after 10 to 18 days.

Prolotherapy triggers a mild and temporary inflammatory response.  The blood flow to the area increases and healing cells arrive in the blood. Prolotherapy may also play a role in the secretion of tissue growth factors that aid in the body’s ability to identify and replace damaged tissue.

What is injected during prolotherapy?

There are a number of different solutions that are used in different practices.  At this clinic, we use glucose and local anaesthetic.  The glucose is sourced from a sterile bag intended for use as an intravenous (I.V.) fluid – something you might have be given in hospital if you became severely dehydrated.  Although prolotherapy deposits only a small amount of the mixture into the soft tissue or joints, an I.V. bag of fluid is intended to be able to be plugged into a vein, where it will go directly to your brain and all of your tissues and organs. Obviously, it is also safe to eat glucose, which is a simple sugar. What makes this simple, harmless substance useful for injection therapies is that is doesn’t usually end up in concentrated amounts in a soft tissue of joint.  When it does, the body responds by launching its repair mode and sweeping in to clean up this new ‘injury’.

The second part of the mixture is plain lignocaine, as used by the dentist etc.  This is mixed in partly for the numbing effect but also because the local anaesthetic polarises tissue cells with the result that the cell walls become more permeable allowing nutrients in and waste out more easily.

What can prolotherapy be used for?

If you think that you have a condition that would respond to prolotherapy in the foot, leg or knee please call Walk Without Pain to arrange an assessment. Alternatively,  Book Online 24/7, here. Read More…