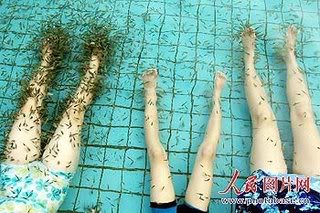 Is having a fish pedicure safe?  In the last five years, spas around the world have copied the Asian trend of providing tanks of fish to nibble away the dead skin on heels and feet. Pedicures are generally performed by the Garra Rufa breed of fish. These are a small fish, black or dark fawn in colour and usually hundreds of individual fish populate each tank.

A research group called the Centre for Environment, Fisheries & Aquaculture Science or CEFAS monitors the health and welfare of fish stocks. They estimate that in 2011, around 20,000 Garra Rufa were imported into the UK each week from Asia. This occurred specifically to restock spas providing fish pedicures. In Australia, we think that the numbers are much lower but increasing monthly. We have noticed in recent months that the discount voucher sites that promote massage and beauty services now include fish pedicures on their menu.

The provision of fish pedicures has been banned in parts of Canada and America and because of concerns over infection and communicable diseases. CEFAS has reported that, while few infections have been found to be reliably attributable to this cause, they are concerned that the fish and / or the water in which they are transported from Asia, could harbour diseases, which could be passed on to humans. Those who have existing medical conditions, particularly diabetes, may have lowered resistance to infection and should be discouraged from having a fish pedicure. Those who do choose to partake should have a thorough foot examination prior to treatment, to make sure there are no cuts, grazes or existing skin conditions that could allow the spread infection either from or to the individual.

Is there any evidence of disease in the fish that perform the pedicure?

In 2011, CEFAS published research in the American medical journal Emerging Infectious Diseases warning of infection risk. They noted that the fish may host a range of organisms and diseases. Some of these may cause a penetrating infection of the flesh of humans who are exposed to them. Many of these exotic strains of bugs are also resistant to antibiotics normally used to treat humans. The increased scrutiny of the fish spa phenomenon came after several thousand fish were imported into Britain. The fish from Indonesia were found to have a disease that caused them to bleed from the gills, abdomen and mouth and subsequently to die.

How are the pedicure fish treated?

Apart from the potential for claims of animal cruelty, what sort of care can these creatures expect? If you have ever been to a podiatrist, you will know that all of our tools come to the clinic room in sterile autoclaved packs. For certain, a tank of fish can’t be sterilised. Neither heat nor chemical methods of sterilising the glass, water or animals could be employed without killing the fish. I personally would be reluctant to put my body into a soup of fish excrement and other people’s foot slough.

Our verdict on fish pedicures?

We think that they are a bad idea in several possible ways. Firstly, there is potential for infection of the skin and flesh. These could develop into blood infection, cellulitis or paronychia / nail infections. Also, the bacteria that would cling to your feet and legs could be dangerous to infants and the elderly and unborn children.  You my already know that cat faeces can cause fatal infection in foetuses.  Lastly, the bugs could be transferred to the face, mouth or foodstuffs by your hands after a spa.  Any of these could cause diarrhoea and vomiting. So, think it through. Although podiatrists may lack the novelty value of a swarm of toothless fish, we hardly ever cause nausea and vomiting!